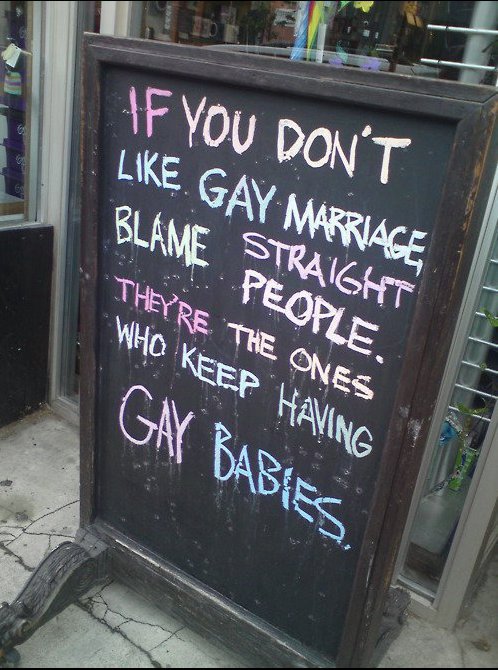 I don’t have the proper words to explain this very well but this guy did a pretty good job.

This is hilarious and sooooooo true! As a heterosexual man I just can’t figure out why so many of my fellow straight people have such a problem with gay marriage. Even if you don’t condone homosexuality why should you be concerned about restricting someone else’s rights that don’t affect you?

The anti-gay push has been driven by the religious right. This of course isn’t anything new. They tried pulling this shit for years prior to the civil rights movement that allowed equal rights for blacks and other minorities. In addition it also allowed for interracial marriage.

Prior to the civil rights movement the religious right tried condoning the restriction of interracial marriage by labeling blacks as sub-humans and lumping them into a category of animals/beasts; therefore pushing propaganda that interracial marriage must remain illegal because humans can not enter into a marriage with an animal. Can we say… BULLSHIT!

So what’s the religious rights’ “biblical” excuse for not allowing gays to marry? They point to a passage in the book of Leviticus in the King James Bible that states that “a man shall not lie down with another man the way he lies down with a woman.”

After reading that passage did you realize that it doesn’t say anything about women lying down with women? That’s because lesbians weren’t thought to have existed during the biblical era. It’s taboo now and it wasn’t even known to have existed then.

By leaving out lesbians in the anti-gay speech published in the Bible it’s quite obvious that the anti-gay propaganda wasn’t inspired by God or even dictated by Jesus. If it was, then God would have been smart enough to realize the rise of lesbians centuries later and consequently would have discriminated against them as well.

This is just yet another reason why religion must stay the hell out of our Government. It oppresses us to live under archaic rules of hatred created by stupid men that continues to be misinterpreted hundreds of years later and used as a weapon to justify hate to a society of mind-numbingly stupid followers.

I’ve said this before in a previous post months ago, but I just couldn’t imagine someone telling me I couldn’t marry someone just because they were of a different skin color.

It’s all very stupid! It should be a natural human right for consenting adults to love and marry whomever they chose despite their gender or ethnicity.